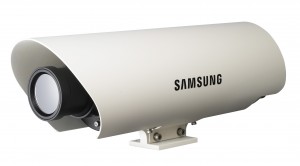 The SCB-9050, which has a detection range of 360 metres and the SCB-9051 which has a detection range of 1,260 metres, deliver enhanced detection capability to a host of security, industrial and safety applications such as perimeter protection, checking for hot-spots and monitoring levels of liquids in containers. As thermal imaging cameras are sensitive to heat sources they are able to detect objects and people in environmental conditions that would be impossible with traditional video cameras such as through smoke, snow, heavy rain and fog. This also makes them extremely effective at achieving their detection ranges both during the day and at night without the requirement of white or IR lighting.

Both cameras give operators the choice of displaying “white hot”, “black hot” or “colour scale”  along with the ability to display an on-screen temperature range gauge, which automatically scales from the coolest part of the image to the hottest.

“Thermal Imaging cameras such as the SCB-9050 and SCB-9051 detect the differences in the infrared energy of objects and their backgrounds. This energy is undetectable to the human eye as well as conventional surveillance cameras,” said Peter Ainsworth, Senior Product Manager Europe for Samsung Techwin Europe Limited. “The SCB-9050 and SCB-9051 do not need any light to generate an image and only require a minimum temperature differential of 0.08°C to produce clear images”.

Weighing a mere 2kg including their integrated housing that is tested to IP66, the SCB-9050 and SCB-9051 are light enough to be installed in a wide range of locations and with OSD (On-screen menu) they can be easily configured for contrast, brightness and sharpness.

Available from all Samsung distributors, the SCB-9050 and SCB-9051 are offered with full support services from Samsung Techwin Europe Ltd including free system design, free technical support and a full three-year warranty.