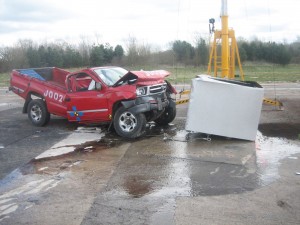 The UK’s leading supplier of floral features is helping to save lives and protect property after developing a security planter capable of stopping vehicles carrying out ram attacks. Plantscape, based in Ashbourne, Derbyshire, has successfully tested a new version of its self-watering planter to the BSI PAS 68 standard after it withstood a horizontal impact test involving a 2.5 ton Toyota Hilux pickup travelling at 64km/h (40mph).

The test, which took place at the beginning of April, saw the surface-mounted planter lose its contents – namely compost planted up with brightly coloured primulas – on impact. It emerged from the experience slightly worse for wear, but, importantly, did not slide across the ground. The Toyota, meanwhile, stopped dead, ending up with a snapped chassis and crushed front end.

The planter, which has a decorative covering surrounding a strengthened core, is the culmination of a development project launched by Plantscape three years ago. It saw the company take advice from the Centre for the Protection of National Infrastructure (CPNI), a Government body which advises organisations on how to protect themselves against attacks. The development process involved learning more about the forces involved in vehicle impacts, the need for the planter to withstand being rammed from various different angles and how they would have to be arranged as part of an overall security scheme.

The test result means that Plantscape is now one of only two UK firms able to supply independent surface-mounted planters successfully tested to BSI PAS 68. The test was a personal triumph for Plantscape’s managing director, Mark Stone, who has made a virtue of advancing the floral features industry with new products that combine aesthetics with improved functionality.

Plantscape has dozens of patents to its name, having also developed a Holestar planter – a raised flower basket that can be put in place without ladders – and the world’s first solar-powered Christmas tree. Ironically, its newest planter will not be patented – Plantscape is keeping the actual designs confidential – but Mr Stone is thrilled to have manufactured a product which will save lives without creating a fortress mentality on Britain’s streets. He added: “This was by far our most challenging project and even though we have undergone a rigorous and thorough development programme, I still had everything crossed for good luck when it was time for the test. It didn’t help that we held it on April 1. “It was amazing to see what the impact did to the Toyota but best of all was the sight of the planter still in place. We were thrilled to have passed the test and we can now move on to marketing the product.”

What made the test even better was that the vehicle was a Toyota Hilux, a model dubbed indestructible by the BBC’s Top Gear programme after it survived being driven down a flight of steps, washed out to sea and placed on a block of flats – which were then demolished in a controlled explosion. The ongoing threat from terrorism and fears of ram-raid criminal activity means that there is a need to protect buildings, but Mr Stone believes that protection doesn’t have to be ugly. “Our planters can foil ram raids and can stop cars laden with explosives from getting into a position where the blast would cause maximum damage,” he said. “At the same time it is vital that although they have that function, they are also attractive, so that communities do not live with the feeling of being under attack.”

The planters are designed to protect locations such as the headquarters of major companies, sports arenas and shopping centres – anywhere where vehicles could be used to launch a ram attack. They will work either by keeping a parked vehicle bomb at a distance or by ensuring that they cannot be driven to where they would do most damage. If the planters were in place at Glasgow Airport in 2007, for example, they would have mitigated an attempted attack from a Jeep filled with propane canisters, which hit the terminal building frontage before bursting into flames.

Mr Stone said that development and testing will now continue to ensure that the planters offer even more protection.

Plantscape is based on a site with 100,000 sq ft of greenhouse space and 15,000 sq ft of warehouse space, enough to house over 20,000 planters and over £300,000 worth of stock. It supplies planters and hanging baskets to more than 300 local authorities across the UK. It is also an approved supplier to the Prison Service. It has 230 products on the market, from hanging baskets and free-standing tubs to towering, multi-layered planters, planters incorporating cycle racks, basket trees and watering systems. Its sister company, Urbanscape, supplies a range of 21st century urban furniture, including benches, litter bins, grit bins, signposts and bollards.

For further information or to request a brochure call Plantscape on 01335 372785 or visit www.plantscapeuk.com.