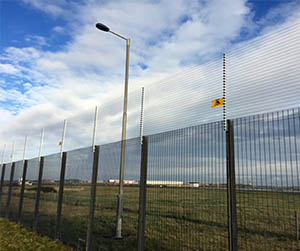 Harper Chalice have successfully launched their new TriSecure Perimeter Detection system into the high security market. As a leading supplier of other tested and approved perimeter solutions Harper Chalice have used their market knowledge and customer feedback to design a unique solution.

TriSecure is a combination system that utilises both the CPNI-approved microphonic detection system, FenceSecure and CPNI-approved electric pulse fence system PulseSecure to create a single hybrid combining the best of both.

Harper Chalice Managing Director Chris Hackett said: “We listened to our customers and industry feedback and found what they wanted was to be able to get the best of both technologies rather than having to compromise by choosing a single system.  TriSecure not only delivers that but at the same time it removes the weaknesses of each individual technology to provide a much more reliable, secure and effective system.”

The issue relating to the electric fence system such as accidental shocks to staff or contractors and vegetation causing false alarms are removed as the electric fence is above the height of the host fence at more than 2m above ground level.  At that height, all these issues are negated but the physical and psychological deterrent remains.

Furthermore, as the electric fence provides the anti-climb prevention and detection, the Microphonic PID is only required to detect penetration attack meaning the system can be set up to reduce false alarms.  Climbing attacks are always going to require a more sensitive setting to detect over a penetration attack.  This negates the biggest perceived issue with microphonic PIDs, the false alarm ate.

Both technologies are then brought together with Harper Chalice’s SecureBus communications network for centralised control and monitoring.  SecureBus brings the two technologies together and presents the systems to the user as a single solution.

The TriSecure system has already been adopted as the chosen solution for many high security applications that would have previously had to choose between the two technologies.

Hackett added: “When it comes to security, particularly high security applications, compromise should never be an option.  Instead systems should work together, with the right technology in the right place, to provide complete security solutions.  That is our role as security system providers, to provide the solutions required to meet the market needs – which was the compelling reason behind the introduction of TriSecure system.”