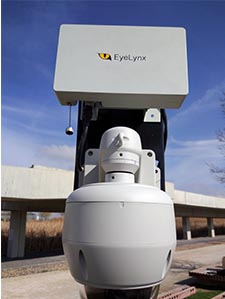 EyeLynx A security software expert has created a portable system to demonstrate instantly the range of its latest radar unit – able to identify predatory vehicles at up to 700m.

EyeLynx has designed a mobile pack fitted with its EPR-500 radar and all-in-one Pharos PTZ camera on top of a tripod and challenged security managers to book a free demo to prove it can detect potential intruders up to a quarter of a mile away – and drones at 80 metres.

The free demo is so EyeLynx can show site operators live, in-the-field in their own environment the EPR-500’s ability to detect security threats early and the capability of EyeLynx software to control CCTV autonomously and zoom in to collect evidence and send to manned patrols or security control rooms.

Chief executive officer Jay Patel says: “We built this pack so we can visit your site, get in your car and drive to the remotest location and set up the radar within minutes with a hammer, batteries and camera and demonstrate the extraordinary range of this powerful radar.

“Even in dense fog or at night, we’ve proven this at sites where it has followed a train travelling at 60mph, panned back to pick up people, then locked onto vehicles entering and leaving the gated car park.

“Installed correctly at strategic locations, the EPR-500 can serve as a high-performance very-low-cost early warning of potential threats on huge sites, with minimal maintenance and no user intervention once it has been fitted.

“Used this way, we believe it could cut the burden on security guards having to monitor and control multiple CCTV cameras.  Security managers can simply log in and manage the site from anywhere using our free SharpView Manager Professional software.”

Radar technology requires line of sight to the target object, so EyeLynx will advise on PIDs or PIRs and other technologies for ‘blind spots.  The system supports multiple radars, cameras and these other sensors and analyses the outputs against user-configured priorities.

The installation and configuration is simpler than with video analytics, returns fewer false alarms, consumes less than 2.5W power and works on the C-band, so no special licences are needed.

However, the radar can work as an add-on to operators’ existing video management system – or as a complete package using EyeLynx’s technology.

The system detects moving vehicles in any weather conditions, even at night, up to 700m away, people at 400m and drones at 80m.

The EPR-500 radar with SharpView detects, tracks and records moving objects in a 120° field of view, such as people and transport, in high resolution, even at night, making it ideal for airport perimeter intruder detection, railway trackside public safety and building site security and asset protection.

The video coverage can also record legitimate activity within the perimeter for health and safety monitoring and productivity improvement.