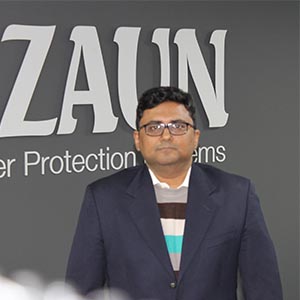 Aamir Siddiqui has joined Zaun as Head of Sales for Middle East and North Africa, alongside Jeremy Knight, who continues as Head of Operations for the region.

It is quite a coup for Zaun, which has been steadily progressing its strategic move into the Middle East.

It recently announced a massive Middle Eastern contract that will see the British manufacturer ship a staggering 200 40ft containers of HiSec Plus, a new flat-panelmesh security fence Zaun has designed for the purpose as a variant of its original ‘358’ welded mesh configuration, HiSec.

Designers have added an extra wire every 250mm on the inside to enhance security and eradicated the V-panel to remove a potential climbing aid.

Siddiqui started his career in the region in 1999 with Chainlink Industries Kuwait, representing Betafence, who coaxed him across to work for the export director in 2004.

Zaun first set up an office in the UAE in the Emirates Tower in Dubai in 2012.

It has delivered prestigious pilot contracts with Petroleum Development Oman worth almost £1.5 million, electric fencing at a military base in Abu Dhabi and is receiving enquiries from Iran, Iraq, Qatar and Saudi Arabia.

Sales and marketing director Chris Plimley said:  ‘We are gaining real credibility in the Middle East, which this latest appointment will only enhance.  It is great to welcome Aamir to drive our sales pipeline in the region.’