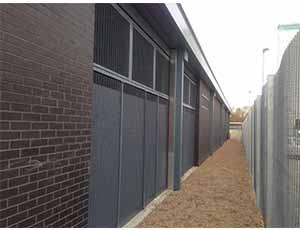 The four-storey office block had stood empty since it was built in 2000 by Agilent Technologies next to the A14 until Suffolk Police and Suffolk County Council moved some of their services there to jointly save £1m a year over the 30-year life of the building.

Landmark House has become the new Ipswich police station, home to 850 police and council staff and the stolen goods warehouse, allowing the existing town centre building to be sold, and the council to sell five of its vacated offices.

It supplied cantilever bi-folding automatic speed gates with sensors that inform the controls and open the gates quicker as police vehicles accelerate towards the gates when speeding out when called out to an emergency.

Zaun also made a huge double set of gates to secure with privacy sheeting to screen the high value asset compound.