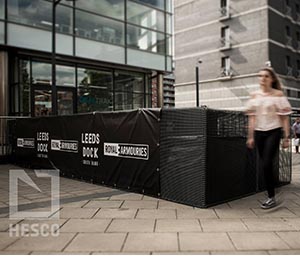 TERRABLOCK is the latest product range to be launched from Hesco, who have been providing innovative security solutions since 1991 to some of the most hostile parts of the world. TERRABLOCK has been designed for use on both corporate and civilian areas, as well as for use in remote parts of the world, and has been in the making for five years.

Created so that it has little to no impact on the surrounding environment, it provides peace of mind to the public that their safety is being secured by a world-leading security provider that has a wealth of experiencing in deterring hostile threats.

As terrorist threats undertake new methods, TERRABLOCK security barrier has been created in response to the heightened state of security the world is currently facing, in order to prevent hostile vehicles from entering public spaces or causing damage and harm.

The London Olympics in 2012, was the first time that Hesco deployed security barriers, with TERRABLOCK developed as a response to the increased security threats and challenges that the world is facing at present.

Engineered and tested so that the security barriers meet the minimum PAS68 security requirement for vehicle mitigation barriers in the United Kingdom, the range consists of five products – XL, XR, XT, XV and XS. Each comes with their own specialism, with the XR providing defence against a 15,000lbs truck travelling at 50mps when tested, as it stopped the vehicle from impacting the surrounding area. While the XT can be built upon to include additional perimeter protection with CCTV, detection systems and surface mounted poles. The XL has been built so that it can be deployed in city landscapes in event venues and as sport stadiums, and the XR adheres to police requirements and is able to withstand a vehicle travelling at 30mph. Previously, the XS has been used in remote oil and gas locations around the world, who require a high level of security.

Built on an energy displacement system, TERRABLOCK is a patented design which minimises the effect of an impact. Using mesh panels, alongside a series of pins and coils to form the security barrier, the solution is anti-climb, providing surface mounted protection also.

Rapidly deployable, and delivered as a flatpack, TERRABLOCK can be implemented promptly and effortlessly as it doesn’t require concrete foundations – using earth from the surrounding vicinity where possible, or a ballast bag.

At present, TERRABLOCK security barrier has been used to protect the Royal Armouries Museum in Leeds, as well as at oil and gas infrastructures around the world, yet is a solution which can be used in a range of environments where high levels of security need to be in place and maintained. As the crash-rated barrier can be branded so that it remains inconspicuous and in-line with an organisations branding, it’s built so that it provides security which is both innovative and fits in seamlessly with existing architecture and infrastructure.

Enabling organisations and public bodies to protect the public with a highly-regarded security solution which has been certified to reduce the impact of hostile vehicles, TERRABLOCK security barrier is an innovative solution which can be deployed across a variety of environments.