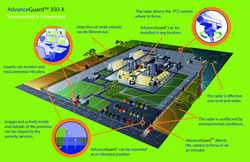 The leading radar technology company won the accolade for their newly launched AdvanceGuard 350-X radar sensor at the 10th annual Detektor International Awards
Navtech Radar, the world leading developer and manufacturer of millimetre wave (MMW) radar sensor solutions for outdoor Security and Surveillance applications, has won the Innovative Achievement Award in the Alarm and Detection Category at this year’s Detektor International Awards.
The Jury’s motivation for Navtech’s AdvanceGuard 350-X, a radar sensor for perimeter security protection reads:
“Early detection of intruders is the most important key to an effective high-security environment. The AdvanceGuard 350-X radar sensor clearly meets this demand in perimeter security applications with a convincing accuracy.”

More than 350 dinner guests attended at the prize ceremony when the Detektor International Award dinner was held in Stockholm in conjunction with the opening day of Sectech Sweden – the bi-annual two day Scandinavian expo on security technology. A total of eleven awarded finalist products were chosen on basis of both innovation and customer orientation as well as for smartness and usefulness.
Lennart Alexandrie, CEO for AR Media International, the publishing company behind Detektor magazine, together with Tom Curry, Detektor’s North American associated publisher and editor, compared the ceremony.

“The criteria for being nominated for a Detektor International Award encompass not only the technical solution but also the packaging and over all presentation of the product, which actually might just as well be a service. The Detektor International Awards should be viewed as a focus on continual technical development, but just as importantly the products should encompass the continual progress of demands for more sophisticated packaging qualities, where the presentation of the whole concept becomes increasingly more of a priority to successfully reach the customer”, Lennart Alexandrie said.

Commenting on the win Jason Burger, Sales and Marketing Manager of Navtech Radar said, “Winning the Innovative Achievement Award at Detektor International Awards is a true honour. Radar is still considered to be an ’emerging technology’ for outdoor security & surveillance , but with the increased focus on early warning, particularly when it comes to perimeter security for critical infrastructure such as airports, power stations, border protection, data centres to name but a few, this recognition of Navtech’s technology underlines the fact that its technology is truly unique and adds value. It can not be emphasized enough, that this accolade is very important for Navtech Radar. As the company continues to grow and establish itself in new markets in these demanding times this high profile recognition is a phenomenal boost of confidence to the entire staff who are working so hard to secure our continued growth”.Detektor International Awards is the only internationally recognized independent awards and the candidates for the awards are solely selected by the editorial board of Detektor International hence it is not possible for companies to apply for evaluation. The jury consists of total 9 members from 6 different countries as well as an external independent consultant.

More information can be found at the Navtech Radar website.