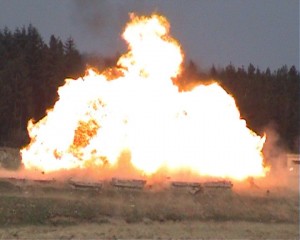 Wrightstyle, the leading UK steel glazing company, supplies glass and glazing systems worldwide to mitigate against fire or ballistic and bomb attack.  In the wake of the Boston and London atrocities, Denis Wright, Wrightstyle’s Chairman, provides a perspective.

Over the past few months terrorism has been much in the news, from the Boston marathon bombings to the murder of a British soldier in London. In the Middle East, Shia and Sunni strife continues to exact a tragic and heavy toll.

Recent revelations about the USA’s Prism metadata gathering system have only added to the impression that the terrorist threat is growing, with a renewed debate on civil and individual liberties in the digital age.

And as an echo of 9/11, you are 11,000 times more likely to die in an airplane accident than from a terrorist plot involving an airplane.

One of the most authoritative sources on terrorism is the US National Counterterrorism Center (NCTC) which maintains statistical information on an unclassified database, the Worldwide Incidents Tracking System (WITS).

According to the US State Department, in 2012, terrorist attacks occurred in 85 countries although, as in recent years, over half of all attacks (55%), fatalities (62%) and injuries (65%) took place only in Pakistan, Iraq and Afghanistan.

As the US State Department makes clear:  “we are facing a more decentralised and geographically dispersed terrorist threat” as military operations continue to weaken terror group leaderships and organisation.  The attacks in Boston and London probably support that assessment.

Countering the terrorist threat is, of course, a matter for the intelligence and military communities, backed by long-term and pragmatic political policies.  You can’t defeat political and religious ideology by military force alone.

However, we have to recognise that terrorism does pose an international threat, particularly from explosive devices, and in that context, a first objective of governments worldwide is to remove explosives from their arsenal.

In terms of the glass and glazing industry, it would be wrong to assume that high explosive alone is the main cause of death and injury when a bomb detonates.  In urban areas, between 80-85% of all secondary blast injuries are caused by flying glass.

When a bomb detonates, it produces gases at very high temperatures.  This in turn leads to a rapid expansion of air and the creation of a shock wave travelling at supersonic speeds.  The shock wave lasts only a few milliseconds and is then followed by an equally sudden but longer-lasting drop in pressure.  It’s the enormous impact of the shock wave and the subsequent suction that shatters the glass and distorts the framing.

Overall, blast injuries result in mortality ranging between 7.8% in open air to 49% in a confined space. A majority of victims (70%) will sustain soft tissue injury, and traumatic amputations will occur in approximately 11% of cases.

Most people killed or badly injured in a blast involving high-order explosives (HE) are affected by either primary or secondary blast injuries.  Primary HE blast injuries are caused by high-pressure gases from the explosion rapidly expanding to produce a supersonic blast wave.  This has devastating effects on human air-filled tissue, particularly the lungs and gastrointestinal tract.  Primary blast injuries are generally fatal.

Secondary blast injuries caused by flying objects, for example glass fragments, are much more common than primary blast injuries and are the most usual cause of death in blast victims. The penetrating injuries occur most often in the exposed areas of the body such as the head, neck, and extremities.

For example, in New York on 9/11, 15,500 windows were damaged within a mile of Ground Zero – nearly 9,000 within half that distance.  Many injuries were glass-related.

The NCTC provides some stand-off guidelines: 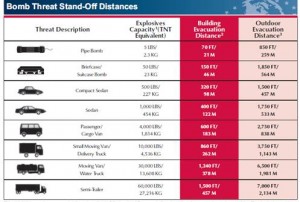 However, what many architects and specifiers don’t realise is that the glass and glazing industries have been fighting back, to rewrite the rules on stand-off distances and, specifically, on the danger posed by flying glass.

At Wrightstyle, we have devoted considerable resource to developing and testing our high-specification systems.  Importantly, our advanced systems, designed to withstand ballistic or bomb attack, have been tested as one integrated assembly because, if the worst happens, the glass will only be as safe as its framing system – and vice versa.

Real testing is important because computer simulations can only tell you so much.  Much better, if you’re testing a glazing system against a bomb attack, to put a bomb beside that system, blow it up, and see what happens.

That’s what we did, at an independent UK test facility inside a secure RAF base.  First we detonated a charge of 500 kg of TNT-equivalent explosive adjacent to the glazing system.  That’s the size of a lorry bomb.

We immediately followed that with a simulated car bomb attack (100 kg of TNT).  The lorry bomb was detonated 75 metres from the test rig and the car bomb was detonated at a distance of 20 metres, producing a higher loading on the façade.  Both tests were equally successful.

Reinforcing the importance of integration, the Wrightstyle system’s strength was achieved through a glazing technique that bonds the glass to its framing support, so that in an explosion the components work together to safely absorb the shock and retain the glazing elements.

Also importantly, the Wrightstyle system looks exactly the same as ordinary curtain walling – making it impossible to tell if a building has been bomb-proofed.

In the glass and glazing industries, we have successfully achieved new levels of fire, ballistic and bomb safety, and are therefore making our built environment safer and more resilient.  At Wrightstyle, our systems are increasingly being specified internationally, underlining our significant investment in design and manufacturing technologies.

Video footage of bomb and ballistic testing can be seen at http://www.youtube.com/user/wrightstyle001