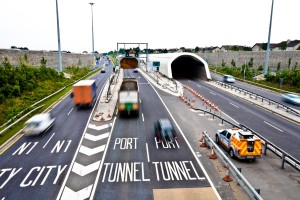 Vital Technology has designed and installed a data communications network at the €752m Dublin Port Tunnel as part of a €0.5m contract.
The project has given the client, Egis Road & Tunnel Operation Ireland (ERTO), a scalable, resilient, fault-tolerant system with dual redundancy across data networking and SCADA subsystems.
The network uses Cisco components and manages a broad range of subsystems including CCTV surveillance from Bosch whose analogue cameras are attachedto blade encoders. The CCTV operates on a ‘one-to-many’ multicasting basis whereby the video is sent to a core switch whose artificial intelligence decides where to forward the stream.
The Dublin Port Tunnel opened to traffic in 2007 and while core components are proving durable, communication systems became subject to early obsolescence and were causing networking problems and unscheduled closures which prompted the upgrade.
Other principal subsystems in use at the Dublin Port Tunnel include public address & voice alarm (PA/VA) which is benefiting from a
proprietary protocol by audio specialists Peavey.  This solution digitises messages over exceptional relay distances of up to 4.5km before the information is converted into analogue data at the core and put through a standard PA unit.
Vincent Byrne is Control Systems Manager at ERTO. He said: “The sensing technology in any major road tunnel is extensive, with equipment detecting carbon monoxide, carbon dioxide and nitric oxide. At this site, all these detection units are wired back to remote, dedicated industrial PCs which control the I/O. These remote units are located approximately one kilometre apart, each dealing with up to 300 pieces of input and output, and integrated into the Vital network.
He continued: “The Vital and ERTO engineers had to segregate the network both horizontally and vertically. There were VLANs whose behaviour was dependent on what equipment type was being used. Add to this the Layer 3 switching and the unusual demand of multicasting CCTV, and it will be seen that the complexity of the project was successively compounded. This was done to ensure that a failure of a single device would never impact upon tunnel availability and safety.  Vital’s response to the brief was impressive and the solution has proved successful in the field.
Crucially, Vital managed to reuse existing fibre optic cabling and in a manner that made the network more resilient by creating a redundant ring topology. Another challenge was overcoming persistent problems with the legacy IP-addressing scheme.
The Dublin Port Tunnel (Tollán Calafoirt Átha Cliath) is the longest urban tunnel in Europe and the largest civil engineering project ever undertaken in Ireland. It is the result of 7.5 million man hours and saw the movement of two million tonnes of rock and clay. The main aim of the tunnel project was to remove goods traffic from urban streets. Currently, the tunnel is allowing 98% of trucks leaving Dublin Port to avoid the city centre, so improving air quality levels for residents and pedestrians.
Much of the tunnel is 23 metres (equivalent to seven building storeys) deep and the twin bores are approximately 15 metres apart except for a cut-and-cover section approaching ground level. The boring machines operated at accuracy levels of + or – 6mm and the project saw the installation of a crossing under the Dublin to Belfast railway line which remained operational during the works.
The construction of three new bridges was incorporated into the project, and during the cut-and-cover phase of the tunneling an excavation site equivalent to the size of a major cathedral was created at Fairview Park to the north of the city near the Tolka River. This is being reinstated and will revert to urban parkland. The goal of reducing goods vehicle traffic in the centre of Dublin has been achieved and the city council’s figures for 2011 show that the daily average number of HGVs during morning peak hours was 1,176 compared with the 2,291 prior to the opening of the tunnel.
https://1stsecuritynews.com/wp-content/uploads/2018/02/Logo1stSec.jpg 0 0 1st 4 Media https://1stsecuritynews.com/wp-content/uploads/2018/02/Logo1stSec.jpg 1st 4 Media2012-07-18 14:38:232012-07-18 14:40:43Vital Technology Installed At Dublin Port Tunnel