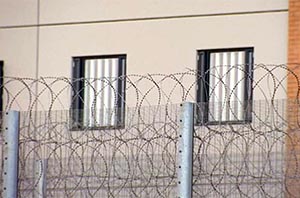 The biggest prison in the UK should reach full capacity soon – with construction work on track to end next month to allow the opening of the third and final wing.

The first prisoners were moved to HMP Berwyn in Wrexham on 28 February into Bala wing, the first of three, all designed ultimately to house 702 prisoners.

The second, Alwen, opened last month, with Ministry of Justice (MoJ) bosses confirming the third and final wing, Ceiriog, is on schedule to open next month, bringing the total capacity of adult male offenders to 2,106 – 500 more than the biggest current prison in England and Wales was built to hold

The majority will be Category C, meaning they have been assessed as having a lower likelihood of escaping, though some Category B prisoners could also be accommodated.

Governor Russ Trent has said his emphasis is on rehabilitation, with staff calling the prisoners ‘men’, who will have ‘rooms’ rather than cells.

The UK government has pledged to spend £1.3bn on new prisons, and after the riots in HMP Birmingham last year, Justice Secretary Liz Truss said the new Welsh prison ‘will help to reduce overcrowding across the estate’.  Nine more new prisons are expected to be built, with five open by 2020.

Binns has proposed a new model of perimeter security and PIDs procurement and delivery, where it provides a single point of contact for the complete perimeter security package, providing greater opportunity for innovation, reducing complexity and the need to manage multiple contractors.

It believes this could offer significant cost savings on PIDs cable installation and contract and project management costs.

HMP Berwyn is already anticipated to be the cheapest prison to run per prisoner in England and Wales.  It is expected to run at £14,000 per head per year, including overheads, compared with £40,170 at Parc in Bridgend, built under the government’s Private Finance Initiative and operated by G4S.