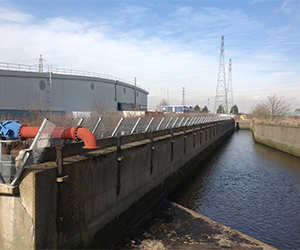 The UK’s largest water and waste company has renewed the appointment of security and perimeter fencing systems manufacturer Zaun to a multi million pound framework agreement for a further year to May 2017.

Thames Water Utilities retains the option to extend for a further two years to 2019 and the end of the current Asset Management Programme, AMP6.

Thames Water originally chose Zaun as one of four appointed contractors for their framework agreement for the supply and installation of security fencing & gates, and one of three for their ongoing maintenance.

It hoped to save almost £500,000 with the framework agreement, as well as the benefits of dedicated account management, certified and experienced perimeter protection designers, engineers and technicians, access to new and innovative products and robust management reporting linked to an exacting service level agreement.

Thames Water manages more than 4500 sites, the majority of them unmanned, that require security to protect the water supply to over 14 million people.

Accidental pollution, the safety hazard of sewage, the potential for theft and even mindless vandalism all mean site safety and security is paramount.

This entailed work on sites of Critical National Infratructure (CNI) near to the London 2012 Olympic Park at Stratford where Zaun also provided security fencing.

For AMP6, Thames Water set about a “complete transformation” of the way it delivers capital investment through a ‘super alliance’ including MWH Global as programme manager that expects to carry out between £2bn and £3bn of work, with £200m alone for security, bringing its estate up to Defra standards and fully prepared for any security eventuality.

Zaun has installed its most intruder-resistant product, ArmaWeave, around secure compounds.

Zaun head of sales Chris Plimley said: “We’re delighted to have our relationship with Thames Water extended for another year and look forward to continue to help them upgrade their estate and its security with the very best integrated perimeter protection systems on the market.”