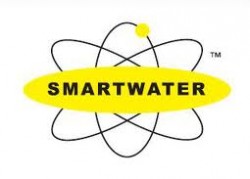 SmartWater’s ability to withstand extreme weather conditions over the course of many years has earned it the highest level of independent approval following rigorous testing.

This means it has been tested to have the equivalent operational lifespan of at least five years, even when used outdoors in potentially harsh conditions. SmartWater is the first product to be awarded this grade since the launch of the specification in August last year.

PAS (Publicly Available Specification) 820:2012 is the only independent test method for the durability of forensic codes to have been published. It specifically tests the robustness of forensic codes used within forensic coding products when exposed to artificial weathering, simulating either indoor or outdoor conditions. Products tested under the regime are banded according to their functional lifespan in the differing environments.

The PAS carries six classifications, three each for internal and external application of forensic marking codes, indicating their tested lifespan as being up to six months, two years or five years, on a Grade A to C system, with Grade A representing the longest functional test life.

PAS 820:2012 was developed as a collaboration between the Home Office, Police, security industry and British Standards Institution. SmartWater Technology Limited had supported the creation of the specification as a way for buyers to independently assess the suitability and robustness of products based on their requirements.

Chief executive of SmartWater, Phil Cleary, said: “The choice of a security marking product is a critical decision for buyers in many sectors. Until recently however, they only had the marketing material and assurances of the product manufacturers to go on, particularly with regard to the durability of the chosen products’ forensic codes.”

“Now, for the first time, they will be able to look for an independent benchmark against which forensic codes have been tested and I’m pleased that they will find SmartWater meeting the highest testable standards. PAS 820:2012 is a voluntary specification, but we are committed to all SmartWater products being tested and categorised against it because that is in the best interests of our customers and we very much hope to see the whole sector adopt it.”

SmartWater is widely-used around the world, including in the protection of critical infrastructure and the marking of lead flashing on rooftops, all of which can be attractive to metal thieves, but which may have to withstand prolonged exposure to the elements.

Mr Cleary added: “Forensic marking products are a key part of a multi-layered approach to risk management and are now widely in use in various forms. The existence of PAS 820:2012, I believe, takes this sector to another level in terms of the faith customers will be able to place in their investment.”