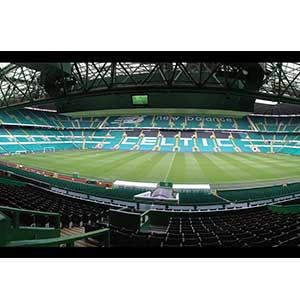 Following in depth consultation and acoustic measuring, PEL Services has provided Celtic FC with a modernised Public Address and Voice Alarm (PA/VA) system, without disrupting the day to day activities of the stadium.

Celtic is the top football club in Scotland and its stadium, Celtic Park in Glasgow, regularly hosts big European occasions to a maximum capacity crowd of 60,000. The stadium not only hosts matches, but also daily activities in the hospitality suite. Replacing the crucial safety systems therefore had to be phased to prevent disruption, taking advantage of the limited down time between football seasons. This also allowed some efficient spreading of the capital expenditure budget implications too.

Initially PEL conducted acoustic measurements (crowd noise levels) during a capacity-crowd UCL match, using the services of Acoustics Plus (an independent acoustic consultant). It identified that crowd noise sound pressure level (SPL) can consistently reach 99dB (A) for at least 10% of the measured period and can reach 112-115dB (A) during goal celebration!

Phase one has now been completed with the existing analogue PA/VA system replaced by PEL with a Bosch Praesideo digital amplification and control system for back of house, combined with an Electro Voice (EV) Netmax system for the main stadium bowl area, all connected on a Dante network controlled from Celtic FCs IT Department. The Equalisation (EQ) of the system was handled by two Sound Web Digital Sound Processors (DSPs). This work has already improved output quality, despite the outstanding need to address speaker types and configuration in Phase three. The new racks not only increase power and quality of signal, they are more compact, more reliable and have power-saving characteristics which will save Celtic FC considerable energy expenditure.

In the design process, looking at a layout which has grown and developed successively in recent years, PELs experts identified and advised the Stadium Manager on additional opportunities to enhance the visitor experience as a by-product of essential works.

Phase two is already underway, with a new match-day entertainment system being installed.

David Howell of Celtic Football Club said: We have been delighted to work with PEL once again on a project which we feel has brought great benefits to the Club and our supporters.

PEL Services has considerable experience in providing sound solutions for stadiums, having worked with Aston Villa FC on its Holte Stand and Scotstoun Stadium, Glasgow, which played a major role in the Commonwealth Games in 2014.

For over 35 years PEL Services Limited has been a leading UK systems company designing, supplying, installing and commissioning sound, fire, security & audio visual solutions. In addition PEL provides a range of service agreements including routine maintenance and fully comprehensive cover, on third party equipment as well as PEL systems, throughout the UK and Eire.

THE LATEST DVS CATALOGUE IS HERE Access Control: Getting It Right