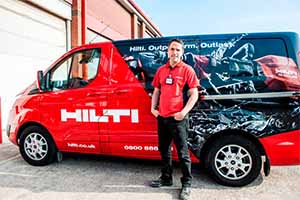 Employees at Hilti, a customer of Connexion2 and long-term Identicom user since 2010, have now upgraded to using the 8 series Identicom lone worker device with additional functionality to improve safety, give peace of mind to staﬀ, and increase ﬂexibility for an employer looking to protect lone workers.

Stuart Lamb, National Hilti Centre Manager, said: “The protection of staﬀ is paramount, and having experience using the device, we know that it works, and we’ve always received great customer support from SoloProtect. In the past we have had an incident where a member of staﬀ has been threatened, we also know that staﬀ can be happy and comfortable with their device and this is why we have chosen to upgrade and expand our Identicom units.”

The Identicom 8 series has been purchased by Hilti as part of the lone worker solution SoloProtect. SoloProtect includes the device, 24/7 manned monitoring, SIM card, mobile network usage, training, inclusive billing and monthly reporting. The solution is fully compliant with the updated BS8484: 2011 (the British Standard for Lone Worker Device services) and is currently the most eﬃcient way to obtain a Police response in the UK, one level higher than a 999 call. *

Hilti are continuing to equip lone workers with Identicom in their retail stores, nationwide. The company, whose trademark red power tools are used on construction sites around the world, operate a direct sales model which includes twenty one Hilti Centres across the UK.
The Identicom device, a uniquely styled Identity card holder, enables lone workers to raise a discreet alarm within easy reach if ever they feel threatened or unsafe at work. Identicom also has a ‘Man Down’ function that raises the alarm automatically should a worker lose consciousness due to a slip or fall, or an unknown health issue.

In the British Retail Consortium’s 2013 Retail Crime Survey, it was reported that violence towards retail staﬀ remains at an unacceptably high level. In 2012/2013 there were 38 reported incidents of violence and abuse per 1,000 employees in the UK.

Identicom and SoloProtect provide an innovative solution to the problems of verbal abuse and physical assault in a retail setting, by enabling the lone worker to discreetly obtain help at the push of a button, without breaking eye contact with an aggressor. Once an alert has been raised this then goes through to an approved 24/7 Alarm Receiving Centre (ARC) where a dedicated member of the lone worker team can listen into and access the situation, and escalate to police if necessary.

Craig Swallow, Managing Director of Connexion2 commented, “We’re really pleased that Hilti continue to see considerable value in the SoloProtect service we provide to their lone workers. Retail continues to be a sector that is increasingly waking-up to the risks facing staﬀ working alone, whether it be for a limited time or the majority of a working day“.