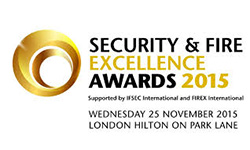 The winners will be announced at a prestigious gala ceremony on Wednesday 25 November 2015 at London Hilton on Park Lane. The event will be hosted by one of the UK’s biggest names in comedy Jimmy Carr, the stand-up comedian and host of 8 out of 10 Cats will take to the stage to present the awards whilst providing some light entertainment.

Now in its 17th year, the event recognises the skill and often bravery of professionals whose play a role that can be life-saving and yet unsung, serving as the Oscars of the security and fire industries, an opportunity to network and, of course,  a great night out.

Gerry Dunphy, Event Director- IFSEC & FIREX International said: “This year has once again seen some really fantastic entrants from across such a wide range of companies working with security and fire.  We are very much looking forward to hosting the industry in November and recognising the hard work and dedication of those working within these industries alongside celebrating the new innovations that are shaking up the market.”

A large number of entries were submitted and assessed by a panel of expert judges. The panel is yet to be confirmed but last year included some of the industry’s most preeminent figures including Dr Alison Wakefield FSyl, senior lecturer in Security Risk Management at the University of Portsmouth (number four on the Top 50 Most Influential People in Security and Fire); Alan Hildage FSyl FCMI MBCI RISC, chairman of the Association of Security Consultants and MD of Griffin Security Solutions; and Don Randall MBE, then CISO at the Bank of England.

Many of the finalists exhibited at IFSEC and FIREX International, including MorphoWave by Morpho, which made the cut in the Access Control Product of the Year category; Cirrus Hybrid by Protec Fire Detection in Active Fire Innovation of the Year; Sony’s 4k camera, the SNC-VM772R (CCTV Camera Equipment of the Year); SleepSafe (Combined Security & Fire Solution); and Kings Security (Large Security Installer), whose installers won prizes in the Engineers of Tomorrow competition.

Xtralis, the pioneer in early and reliable detection and remote visual verification of fire, gas and security threats, is the headline sponsor for the 2015 edition.

This year’s charity partners are the Ghana Education Trust and Suzy Lamplugh Trust. The event has in the past raised funds for the Children’s Burns Trust, ActionAid and Victim Support among others.

Click here to find out the shortlist of finalists, to find out more about the event or to register to attend.