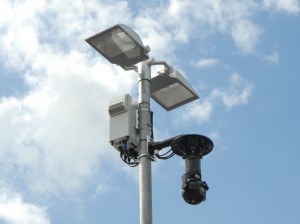 Power over Ethernet (PoE) is an established technology which has been used for many years for powering devices over network cables.  However, “Ethernet over Power (EoP)” is a technology recently introduced by Essex-based ClearView Communications to allow security IP networks to run over mains cables.

ClearView has developed EoP to facilitate communications of IP security systems including CCTV, Access Control, ANPR, Intercoms and Public Address. It is of particular value where it is difficult or expensive to install new signal cables into a building or site, or when security systems need to be provided in short timescales, and where power cables are already in place.

Douglas Borough Council, the largest local authority in the Isle of Man, took the decision to install closed circuit television (CCTV) at the North Quay in Douglas, the island’s capital and political centre.  Viseum Intelligent Moving Cameras (IMCs) are used by the Council.

Although cabling for mains power had been designed and installed as part of the scheme, the decision to install CCTV cameras to help protect the area was made at a relatively late stage – once all the ducting was in place.

Ethernet over Power (EoP) was used to “digitise” the local electricity infrastructure to support both internet and the sophisticated Intelligent Moving Cameras chosen for the scheme.  Each auto-tracking camera has an IP address which utilises the mains cable network to get pictures and telemetry data back to the main control room in Douglas.  Four Viseum IMCs are individually mounted along the quayside, monitored from a central control room, with digital recording capability at both the camera and the control room.

Council Leader David Christian, Chairman of the Policy and Resources Committee, said: “With the regeneration of the North Quay, and the area rapidly becoming a major entertainment and leisure zone for the capital, extending CCTV coverage to the locality was a priority. The Council fully supports the use of CCTV as it helps protect the public, acts as a deterrent to antisocial behaviour, and footage can be used in Court to bring criminals to justice. We have also been encouraged to learn that our partners, the police, have indicated they would be in favour of monitoring the CCTV coverage ‘live’ at weekends.  Each intelligent moving camera gave the coverage of about 20 of the older CCTV units.

A large public school, with boarding facilities, wanted to provide an increased level of access security to both the residential and teaching buildings on the campus.

The requirement created two major challenges for the school since the accommodation buildings were not linked to the school’s computer network, and most buildings were listed, with extensive use of wood panelling internally, so running new cables would be difficult, time consuming and expensive.

ClearView came up with the concept of using their IP-based access control system, with each door communicating back to the central administration server using Ethernet over Power (EoP) technology.  All that was needed for each door controller was a mains power spur.

A local authority which operates a caravan storage facility for paying clients had experienced several break-ins to the site with significant thefts, along with damage to the parked mobile homes.

The council wanted to increase security on the remote unmanned site quickly, and at minimum cost.  Funding was approved for lighting-column mounted PTZ cameras supported with loudspeakers to communicate with intruders from the council’s a remote control centre.  However, the ducting used to carry the mains power to the existing floodlights was old, with no facilities to run signal cables for security equipment. To run signal cables for security equipment across the park, which was around 400m in length, would have required expensive civils works.

ClearView proposed a solution for remote monitoring over a wireless IP link to the council’s central monitoring centre, with facilities to communicate with intruders from the control room via loudspeakers located on the site. ClearView’s IP pan/tilt/zoom cameras and IP loudspeakers are mounted onto the existing lighting columns with video, telemetry and audio signals fed over the mains power cables using Ethernet over Power (EoP) back to a local hub on the site which, in turn, transmits all signals back to the control room.

The client was delighted with the innovative design since costly civil or cabling works were not required which resulted in a shorter installation programme.

Entrances on commercial sites can often benefit from technology to assist with the control of visitors on and off site, including CCTV, ANPR, access control and intercoms.  However gatehouses are often built before these technologies were available and do not have the required infrastructure cabling in place.

This was the situation at a logistics depot in East Anglia. The client needed to implement ANPR to operate with vehicle barriers at the main entrance to the plant. Although the gatehouse, which was 200m from the depot office, had mains power, there was no facility to run signal cables; and a wireless communications link was not possible since there was no line-of-sight between the gatehouse and the office.

ClearView’s Ethernet over Power (EoP) system was proposed to carry ANPR, CCTV and intercom data back to the depot office from where staff can view entrance activity, control barriers, view ANPR data and communicate with drivers via ClearView’s IP intercom system.

ClearView is increasingly finding that EoP can provide a quick and lower cost solution to the challenges of creating an IP network for security applications.  Once the EoP network is in place, the user can benefit from other services which can be run over the same network including wireless network points, VoIP telephony, room control and asset protection.

Since 1996, ClearView Communications has been meeting some of the world’s most demanding security requirements by utilising their experience in design, manufacture, installation and service of the following individual or integrated system solutions: Access Control, CCTV, ANPR, Gates & Barriers, Fencing, Perimeter Intruder Detection, Intruder Alarm, Fire Detection, Building Management Systems and Public Address. In addition, the company has built a reputation as world leaders in the design and manufacture of a specialist range of products for police applications including CCTV decoding, custody, video interview, electronic security systems and wireless CCTV.

Nothing But Business Intelligent Transmission Solutions