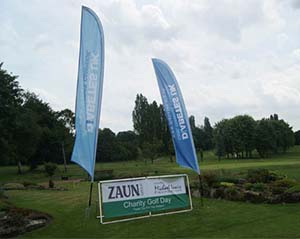 A Walsall family has been honoured with a national fundraising award after a golf day and charity ball took their funds raised over the £50,000 mark.

Diabetes UK awarded the Lewis family both their regional and national Inspire Awards for their amazing work to raise funds for research to help find a cure for type 1 diabetes after their son Michael died in October 2015 from complications related to the illness.

Mother and father Cheryl and Tim Lewis and their other son, Nathan, are passionate about raising funds and awareness so set up the Michael Lewis Foundation in March 2016.

They raised a phenomenal £25,000 last year while raising awareness of the condition by working with schools, companies and other organisations to share their story.

In the past month, they have organised a charity ball in Sutton Coldfield that raised a further £8,320.

And Steve, who is also marketing manager for steel fencing manufacturer Zaun Limited, organised a Security Industry Charity Golf Day at Walsall Golf Club that raised another £8,300.  He plans to make it an annual event.

Michael died after suffering a cardiac arrest in his sleep on 25 November 2015 while working in Dubai, aged only 20.  The family believe he died of Dead In Bed syndrome, associated with type 1 diabetes.

Michael had lived with the condition since the age of four, but never allowed it to prevent him achieving his goals.

Dad Tim said: “Unfortunately, Michael will never see the positive impact his life has had on so many people young and old. His infectious personality led him to inspire and motivate people to believe they can achieve whatever they desire.

“He believed that the barriers we come up against in life are there only because we put them there.  Remove them and anything is possible.

“We as a trust want to do anything we can to stop any other families from having to go through this heartache so we will be raising funds for Diabetes UK to help to try to find a cure.”

Steve added: “We want to say a massive thank you to all of the sponsors and teams at the golf day – and give a nudge to them to come back again next year!”

To help raise money for this cause please visit.