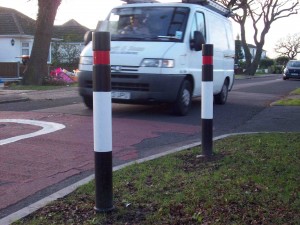 The Essex council had been using another supplier for the bollard installed on pavements to protect kerbs, pedestrian crossings and car park entrances, but was obliged to find another provider when the product was discontinued. It asked APT Security Systems to adapt its Flex Bollards to a similar design to those already installed, as Adrian Watling, Road Safety Engineer at Southend Council explains:

“The Flex Bollard has many advantages,” he says. “Should a vehicle come into collision with one, not only will the damage to the car be substantially less than with a hard fixed bollard, but the pavement should not be damaged.”

The council has to date installed three quarters of the 100 bollards it has acquired and Adrian sees scope for the relationship with APT to continue for many years to come: “There seems to be an almost limitless number of applications for the Flex Bollard,” he says. “We recently installed them on the entrance to a 20mph zone and feel that it is having the desired visual impact as a traffic calming measure and slowing the vehicles down.”

Described as providing ‘boundary security with passive safety’, the Flex range is ideally suited to lower risk scenarios, where the emphasis is on protecting more substantial barriers or curbs from significant damage. They are also ideally suited to denoting parking areas, pedestrianisation schemes and other similar zones where a perimeter needs to be clearly defined.

Chris Rowlands of APT Security Systems says that while the request from the Council was unusual, it was not unique: “We don’t often get asked to design bollards to replicate another that has already been installed,” he says, “but when using multiple bollards on one site, it is important not to compromise on the aesthetics.

“These bollards are being used in a variety of different scenarios and such is the versatility of the product that its potential uses are very wide reaching. We are pleased to be working with Southend Council on keeping motorists and pedestrians safer while using the roads,” says Chris.

The Flex series comprises two static variants – Flex slim and Flex mid – offering bollards from 80mm to 180mm in diameter, and 680mm to 900mm in height. The series also includes the Flex telescopic range offering bollards with a diameter of 220mm and a height of up to 450mm. APT will shortly add a new Flex automatic rising bollard to its portfolio.